In WCS 7 , this feature can be leveraged to make use of eXtreme Scale cache provider instead of the default dynamic cache engine, The default DynaCache provider is good enough for small applications and you have to do some due diligence before deciding to move to eXtreme Scale.

Refer to the decision tree flow chart in this article "Decision Tree for Migrating existing DynaCache Applications" to decide between default Dynacache and eXtreme Scale for your WCS implementation.


Let us first examine some of the issues with default Dyna Cache engine and what exactly does eXtreme Scale solve for us.

1. One of the major issues with DynaCache Engine in cluster mode is that it duplicates the cached objects across the clustered WCS instance. As depicted in the figure you can notice that the same object copy exists in all of the Dyna Cache instances, in case of eXtreme scale cache the Object copies are saved in an efficient manner by not duplicating across all of the cache memory, in case of WXS, the extreme scale engine knows on which JVM memory the Object cache resides and hence the object cache need not reside with the same JVM as the requesting client. 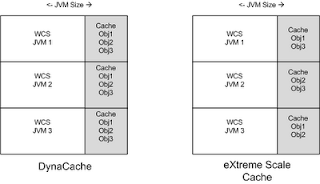 a. Increased space need to store the objects in default Dyna Cache Provider
b. Invalidation / updates of the objects requires additional overhead of synchronizing multiple copies of these objects across the clustered JVM's


1. WebSphere eXtreme Scale lets you leverage transactional support, improved scalability, high availability, and other WebSphere eXtreme Scale features without changing your existing dynamic cache caching code, I have underlined the previous line, it is important to note that the existing code is not impacted at all by changing the cache provider, the cache provider in this case works like plug and play.


2. Refer to following article for more details around How to configure dynamic cache provider for websphere eXtreme Scale.

The eXtreme Scale provider automatically    creates containers inside a WebSphere Application Server process when you are using embedded or embedded partitioned topologies for a cache instance (This configuration is good enough for small projects). No further configuration is needed for these topologies.

When you are using the remote topology (This configuration is preferred for large projects which may have huge amount of data in server side cache), you must start up stand-alone eXtreme Scale containers before you start the WebSphere Application Server instances that access the cache instance.